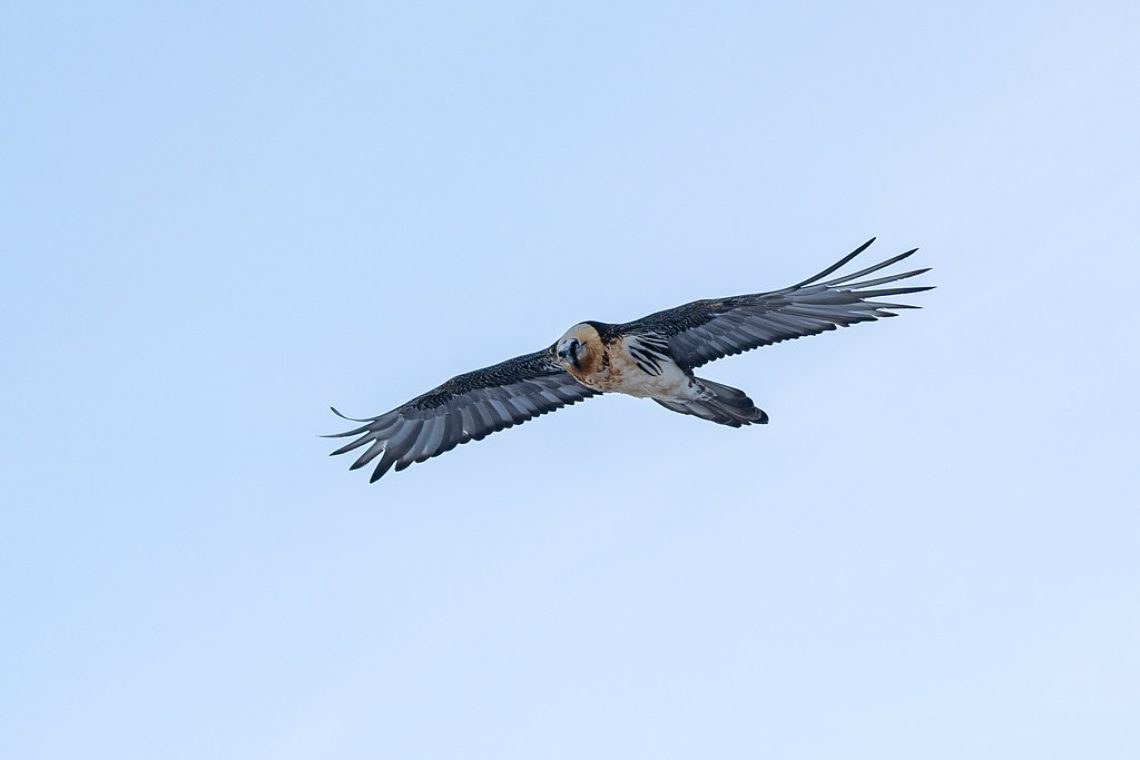 The Bearded Vulture (Gypaetus barbatus) epitomises so much about our relationship with nature. It was hunted to extinction in the Alps by the early 20th Century, partly due to the absurd legend that it snatched small children, an early example of the continuing ‘bad press’ vultures still seem destined to endure. A small Pyrenees population was sustained and, through many conservation efforts on both sides of the border, their numbers have grown substantially since the ‘90s with about 100 breeding pairs throughout the Pyrenees chain. With a near 3m wingspan, it is a timid, cautious bird that presents no threat to anything.

It is deeply affected by human activity in the mountains, very sensitive to sound and encroachment. The increasing popularity of mountain activities and the use of drones places even more strain on an already fragile existence. Except for the wings, its plumage is white, dyed orange/yellow in iron-rich springs to demonstrate maturity and indicate a breeding bird that is ready to defend its territory. Pairing for life, Bearded Vultures live a solitary life unlike their cousins the Griffons which live in colonies. Occasionally, around their second year, a young bird will depart on a ‘Grand Tour’, flying thousands of miles to unusual locations, such as ‘Vigo’ visiting the UK in 2020. After such adventures, these birds never move very far again! This is one reason for the LIFE GypConnect program that aims to encourage a genetic mix of Alp and Pyrenees populations by creating stepping-stones, a corridor to connect two otherwise remote populations.

Despite its size, a Bearded Vulture will not approach a carcass if a Golden Eagle is present. Prime nesting sites are at a premium, with the vultures often taking second place and occupying less ideal locations, susceptible to predation, poor weather, and disturbance. The Bearded Vulture’s diet is principally bones and the marrow within, aided by exceptionally strong stomach acid. But this digestion process leads to a susceptibility to lead shot poisoning from animals unclaimed by hunters.

Bearded Vultures fly elaborate courtship displays and begin to mate from mid-October. They are very early nesters, laying generally one egg in December at predominantly high altitudes, above 4000 feet. Consequently, very young chicks are in the nest in the coldest months. This is thought to enable the highest supply of food at the critical moment in chick development when the winter snows begin to recede revealing the carcasses of those who perished in the harshest months. What a start to life! The ‘beard’ is thought to aid the adult bird to detect wind speed and direction, aiding one of its favourite feeding methods; dropping bones from a great height to crack them open for the marrow, a habit that coined their nickname the ‘bone-breaker’. And more inaccurately,  ‘the lamb-taker’.

The Bearded Vulture presents us with much to appreciate and understand, while posing many questions about how we can better manage and balance our increasing love of the mountains, whose wild, rugged appearance belies a fragile, sensitive reality. Much the same as the Bearded Vulture.

Richard Prime is a naturalist living in the Pyrénées-Orientales. He volunteers for Bearded Vulture conservation projects alongside his work as a bespoke tour guide to the mountains and the birds of the area.
PrevPreviousThe Coot: More than a Monochrome Miscreant
NextBirding FCNext