The Coot: More than a Monochrome Miscreant 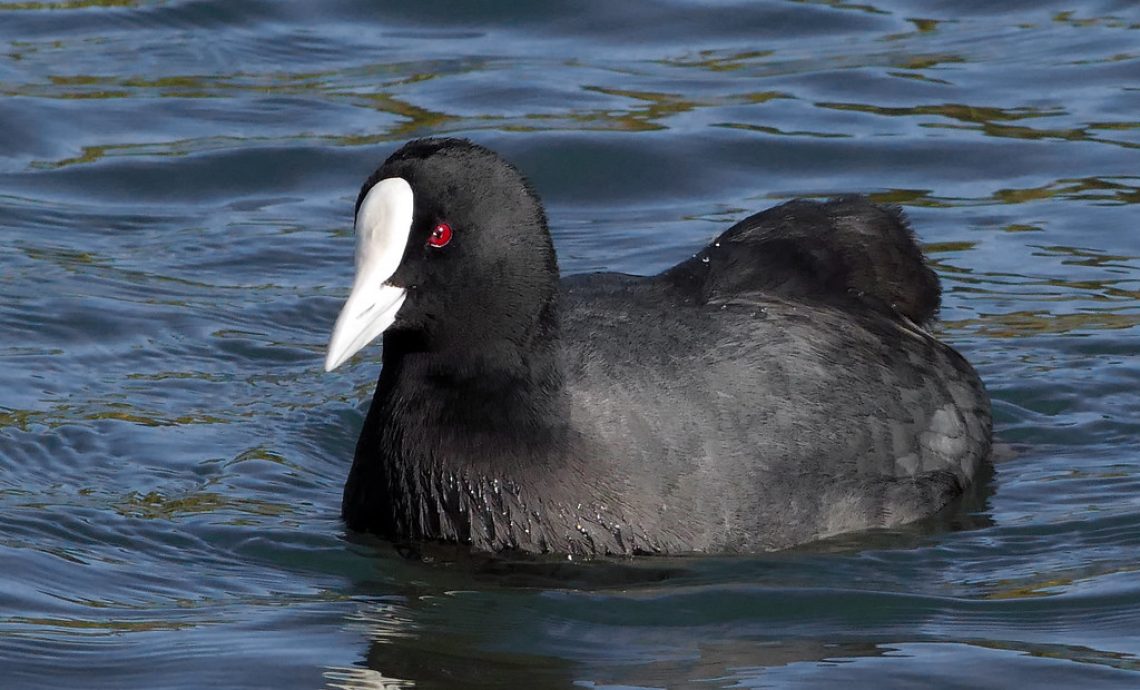 I’ve always thought the humble Coot was a much-maligned bird. Often seen as the aggressive local pond bully, forever bickering with its own and other species, and piercing the peace with its explosive “pink” call. They upset the Mute Swan feeding public as they steam in and thieve the spoils from under the bills of more popular birds.

In Winter, I’ve even seen them run over the backs of Mute Swans using them as a set of giant avian stepping-stones to get to the front of the queue!They definitely deserve a second look though, especially at what lies beneath the water. Their legs, albeit beginning life with a dull grey-green tone, soon develop stunning orange and vermillion “stocking tops” as they mature, and what about those feet? On land, their feet have a truly reptilian, some would say alien, quality with multi-flanged spread toes tipped with razor sharp claws. The aquatic Velociraptor of modern times.

I spend a lot of time ringing and studying Mute Swans in North-East England and where there are swans, there are normally Coot. They’ve always fascinated me, we’ve known for a long time they move at night, but where do they move from and to and how far? Is it just local pond-hopping or do they go farther afield? I started ringing them not long after acquiring my ringing licence in the 90’s but recoveries of ringed birds were very few and far between. In 2009, I found a colour ringed Coot on my local lake, and I was delighted to find it was ringed by Kane Brides of WWT at Southport Marine Lake, quite the movement, and this certainly piqued my interest further.

The Coot colour ringing project began in the North-West and developed over time to use coded darvic rings with up to 25 ringers studying Coot across the UK. Recorded movements picked up with the use of rings that were easily read through binoculars, and I soon had recoveries from Killingworth Lake on North Tyneside to Manchester, Sheffield, Glasgow and St Abbs with birds incoming to the North East from Stoke On Trent, Southport and Linlithgow but the movements remained strictly intra-UK. Was there going to be a Coot that made it over the North Sea, and would it be found?
The answer came early one morning in May 2015, as I stared blearily at a text message from Kane, telling me the last Coot I ringed at Killingworth in 2014 (B6V) had been found at Gentofte Lake, Copenhagen, Denmark! Not only that but there were photos and a YouTube video of it dancing among the Greylag Geese on the shore!

I was delighted, but more was to come, in September 2015 a local birder found B6V at QE2 Park, up the road in Ashington, it had successfully made the return trip to the North-East and then in February 2016, I found B6V back at the Killingworth ringing site! A round trip of some 1800km, remarkable.

So, the next time you raise your bins and scan your patch pond for the latest rare duck or gull, it’s worth pausing to take a peek at the “local” Coot and its colourful legs, it may actually have just returned from a continental jaunt across the North Sea!

If you come across a ringed Coot, you can report it and find out its known history using this website:
www.waterbirdcolourmarking.org

Andy is a member of Northumbria Ringing Group. He has been ringing Mute Swans and Coot in the Northumberland and Tyneside area for longer than he likes to remember, mainly to take his mind off the plight of Newcastle United.
PrevPreviousThe Viewing
NextLiving with Bone-BreakersNext