The telly’s got it wrong again.

Mine – and yours too, I wouldn’t be surprised – is bird song.
So petty. So very, very petty.

But compulsive, too. I like to think of it as a sign that I’m paying attention, that I’m fully involved in the viewing experience, not checking my phone every two minutes. It starts with noticing.
“We think you ought to have a look at this, Sir.”  John Thaw walks resignedly to the crime scene; I mutter “ooh, dunnock”.

This is how unbreakable habits begin. You start listening for the bird song, missing crucial plot points. And it’s a short step from there to ‘TV show listing’ – how many species can you hear in an episode of Midsomer Murders?

And of course, you start noticing the mistakes. The Queen’s Gambit – the miniseries that made chess sexy – was excellent telly. Amazing production values, superb cast, gripping story line. Who knew chess could be so absorbing on the small screen? And then a chaffinch turned up in Ohio. Tsk.

I don’t actually think worse of a film or TV programme if it gets birdsong wrong. It’s not a dealbreaker. There are greater sins: implausible plot, clunky dialogue, wooden acting. But it is frustrating, and sometimes you do wonder. So much attention is paid to every aspect of a screen production – continuity, music, sets, costumes, casting, getting the damn words right, and so on.
And then you get a great northern diver calling in a Devon wood. Perhaps I should hire myself out as a TV Show Bird Song Consultant.

Even my favourite shows aren’t immune to the lunacy. I was fully involved in the heart-warming and hilarious character development of the Rose family in Schitt’s Creek, but an extraneous sound in an episode in Season Two had me rewinding fifteen seconds just to check I really had heard it.
Swifts? In small town America? Really?

The absolute classic, the one guaranteed to get any birder “well-actually-ing” to the accompaniment of the eye-rolling of their loved ones, is the collared dove. Yes, you might well hear collared doves in the countryside and on farms and in woods. And yes, it is an evocative sound. But it’s also a sound that was first heard in the UK in the 1950s. So, plonking it in the background while a Mr. Darcy lookalike woos a demure maiden on his 18th-century country estate simply doesn’t wash, I’m sorry.

When a programme does get it right, though – and emphatically, rigorously so – you know you are in the safest of hands.
Hello, Detectorists.
What a programme. As close to perfect as makes no difference. And shot through with a love of nature. Even down to the bird song FX.

Here’s the very beginning of the script of the first episode:

You have to love it. And it’s the same the whole way through.
The very slightly awkward thing about it is that the bird songs in the broadcast version don’t always match the ones specified in the script, but to kvetch about that really would be the height of curmudgeonliness. I’m petty and pedantic, but not that petty and pedantic, and it would be a harsh and ignorant person who failed to acknowledge that things can change between script and broadcast. It’s enough for me that the script specifies the species at all. It shows that Mackenzie Crook was thinking about the details, the fabric of the show, the things that make the characters flawed and believable human beings whose stories we want to know and whose fates we’re invested in, no matter how much we realise that they might just be a bit of a dick (I’m looking at you, Lance).
The things, in short, that make a show truly great.

I managed, through Kit (the esteemed host of this blog and of the excellent Golden Grenades podcast) to get a message to Mackenzie Crook. I just wanted him to know that his attention to detail had been noticed. Imagine my unbridled delight when I got a reply:
“I knew, when I specified birdsong in the scripts, somebody somewhere would understand.”

That somebody somewhere was me. And, I’ll wager, it might just be you, too. 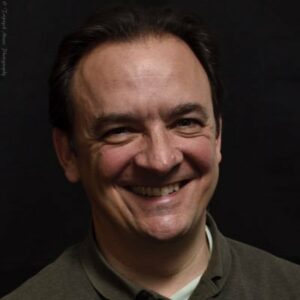 Lev Parikian is a writer and conductor living in south London. He has written 5 books, including Why Do Birds Suddenly Disappear? and Into The Tangled Bank
PrevPreviousBirding and Blagging
NextThe Tale of Two NaturalistsNext